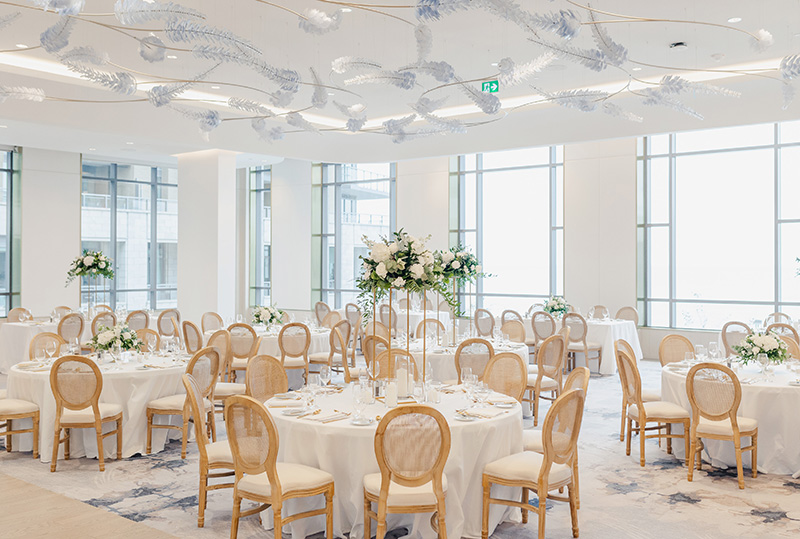 BURLINGTON, Ontario – When construction began on Ontario’s new luxury hotel there was only one contender for its powerful amplifier system; LEA Professional. Located just steps from Lake Ontario, The Pearle Hotel & Spa officially opened to guests on the first of November, 2021. The hotel, which is part of Marriott’s Autograph Collection, boasts 151 guestrooms, two dining facilities, expansion meeting space, two large ballrooms and a spa.

Branch AV, one Canada’s newest audiovisual solutions company, was tasked with designing and integrating the entire AV system from the ground up. The company, which was established in 2020 by Bob Guy and George Puthenkulam supported by a team of experienced audiovisual professionals, works across various industries including performing arts, government, education and entertainment. The team are laser focused on providing the best user experience for their clients.

For The Pearle hotel’s AV needs, the integrator turned to local partner SC Media who supplied nine LEA Professional Dante Connect Series amplifiers to power the new hotel’s sound system. George Puthenkulam, Partner at Branch AV, first made sure to understand exactly what the hotel would need from an AV system.

“The main thing hotel management was looking for from an audio system, was functionality,” said Puthenkulam. “However, I wanted to dig deeper, so we studied all their venues to see exactly how they are used. With that knowledge, we came up with a sound system design and user experience that they are happy with.”

The entire project was conducted during the height of the Covid-19 pandemic which meant delays in various equipment and constant changes.

“There were various iterations made throughout the project because the spaces kept changing,” said Puthenkulam. “With Covid happening it was pretty challenging trying to coordinate with all the trades, and make sure everything would be completed on time. Luckily the LEA amps were in stock and there were no delays from that end.”

Branch AV utilized nine LEA Professional Dante Connect Series amps for this install to give them the channel count they needed including one Connect 168D, one Connect 88D, one Connect 704D, two Connect 84D and four of the Connect 354D amps. As the configuration of the spaces changed, so too did room for equipment racks.

“One of the challenges we had was finding space for racks,” explained Puthenkulam. “As you can imagine, a hotel of this size requires a lot of processing. What LEA provided us was the ability to do a certain amount of central processing, as well as decentralize it, but manage it all from one location, the entire system runs on a Dante audio network.”

LEA Professional Dante CONNECT SERIES amplifiers are the world’s first Internet of Things-enabled, professional-grade amplifiers. Available in two-, four-, and eight-channel models, they feature direct Hi-Z (70V or 100V) or Low-Z selectable by channel. With three ways to connect, integrators can engage the built-in Wi-Fi access point, connect to the venue’s Wi-Fi, or use the FAST Ethernet to connect to any local area network via Cat5 or Cat6 cable.

Puthenkulam explained that using IP standard, network-based amplifiers had many benefits for the team, particularly as the design within the hotel changed.

“The placement of speakers is always a problem, especially when there are multiple trades trying to compete for real estate,” explained Puthenkulam. “We zoned the space well, so that our infrastructure could be coordinated with all the other trades, including lighting control, security, fire safety, et. which is necessary and required in a hotel of this sort. However, we did have new zone needs that came up; so, designing the system around network-based, multi-channel amplifiers gave us a lot of flexibility.”

Branch AV are utilizing the Connect Series Crestron Control Module to control and monitor essential functions and features within the LEA amplifiers. Third-party control plugins such as these are part of the LEA Professional control ecosystem, in addition to local area network amplifier control using LEA’s Web UI and Cloud Platform.

“With Creston the client is able to monitor everything centrally from their back office and so from a user experience point of view they really feel like they have 100% control,” said Puthenkulam. “For us at Branch AV this is extremely important, we don’t want clients to be labored managing an AV system but it’s also essential to give them the ability to view what is going on and truly feel secure in the system.”

Branch AV has been using LEA Professional in all their AV projects and will continue to do so, not only because of their form factor and network-based design, but because of their confidence in the team behind the product.

“When Blake Augsburger and his team set up LEA a few years ago, we knew that they would have a completely different perspective than other manufacturers, and that LEA would build a product that puts the customer at the center,” commented Puthenkulam. “When you are customer- driven and are determined to rally around them it’s really special, and that’s the LEA way!”