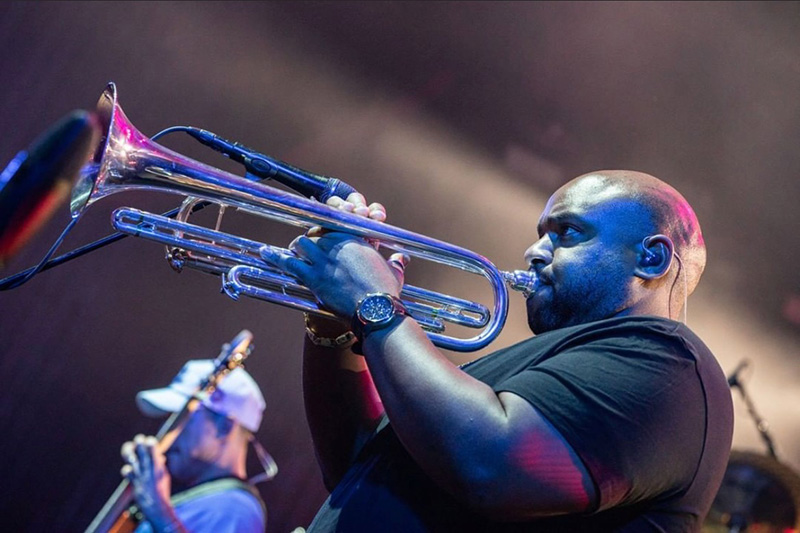 Like most working musicians, trumpeter Rashawn Ross of the Dave Matthews Band was thrilled when the band went on a 2021 tour after about 15 months of pandemic-related inactivity. “It’s been really good, and it’s been therapeutic for all of us to get back out and do what we love,” he says.

Despite attending Berklee College of Music, Ross considers himself a blue collar musician. He started gigging at the age of 14 in his native St. Thomas in the US Virgin Islands. “I was playing with grown men, learning on the bandstand, out on the road,” he recalls. “That taught me how to be in a band and play my part as a piece of the puzzle. And that has turned out to be a strength for me ever since.”

For musicians, a significant part of the puzzle is hearing-related. With all the rehearsals, sound checks, and gigs on an actual tour, overexposure to high volume sound is an occupational hazard that must be navigated.

Having opened for Dave Matthews and striking up a friendship with DMB sax player LeRoi Moore in 2003, Ross was invited to join the band in 2005. That was Rashawn’s first exposure to using IEMs on stage. “Prior to DMB, none of my bands used in-ears. It was all floor monitors, and you would just have to keep turning it up,” he recalls. “I was definitely starting to experience some hearing loss, with lots of ringing and asking people to repeat themselves.”

Fortunately for Ross, the Dave Matthews Band touring team had already addressed that issue, working with audiologist Dr. Michael Santucci, founder of Sensaphonics. Monitor engineer Ian Kuhn let him know that in-ears were part of the gig and recommended the 2MAX for its accurate sound and high isolation, then helped Ross navigate the move to IEMs.

“It was absolutely life-changing,” says Rashawn. “Very different, but awesome, because now I could hear the music with such clarity. In fact, I can actually hear a lot more nuance now.”

Being a trumpeter who also contributes backing vocals, Ross definitely benefitted from mixer Ian Kuhn’s experience in transitioning people to in-ears. “Coming from floor monitors where you’re hearing the whole room, then switching to in-ears and hearing it inside your head, there was definitely an adjustment period,” says Rashawn. “At first, I was blowing too hard without even realizing. So I talked with Ian, we found that rolling off the high end and boosting the midrange was the key. That really reinforces what I’m accustomed to my horn sounding like in the room. That’s all it took, and I’ve loved it ever since.”

With the amount of sound exposure that comes with being a touring musician, Rashawn Ross has come to realize how critical it is to keep his volume levels in check – especially with the long shows that Dave Matthews Band is known for. The 2021 tour is typically four headlining shows per week, often with an extra festival as well. Each show averages 2.5 hours, plus rehearsals backstage. Add to that the sound exposure on tour buses and airplanes (usually with headphones in), and the threat to hearing health is very real.

So when DMB came through Chicago on their first post-pandemic tour this summer, Ross paid a visit to the Musicians Hearing Clinic at Sensaphonics for a hearing test.

“I jumped at the opportunity because I’d never done it before,” says Ross. “I had spoken with Dr. Santucci at rehearsals and shows previously, but since moving to in-ears and turning it down the past several years, my ringing had stopped. But this was a chance to have my hearing checked by the best in the business.” 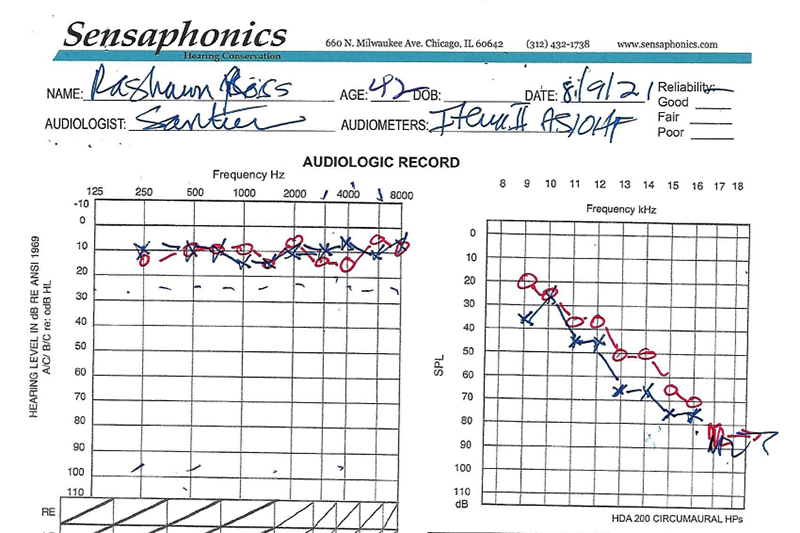 At the Sensaphonics Musicians Hearing Clinic in Chicago, the hearing test covers the full range of frequencies, including the highs that are ignored in typical screenings. Upon completion, the results confirmed what Ross had hoped. “He came in with a big smile and said, ‘Rashawn, you have the hearing of a 20-year-old.’ I couldn’t have been happier.”

Dr. Santucci also counseled Ross on other potential sources of hearing injury, including airplanes, the tour bus, and cell phones, including tips like using the Health app on his iPhone to alert him when he’s been listening too long without a break. They also talked about the unique needs of horn players, an area that Santucci knows personally from his own background as a trumpeter.

With the proven ability to hear his mix more clearly and more safely due to the high isolation of his Sensaphonics 2MAX, Rashawn Ross is confident that he will have a long, full career as a musician, and encourages others to do the same. “As Dr. Santucci said, ‘I see blind musicians. I see musicians who are mute but can still play their instrument. But I’ve yet to see a deaf musician.’ For me, that really hit home,” he says. “With Sensaphonics, I’ve found the right tools to protect myself for years to come, and my hearing test is proof of that. I encourage all musicians to do the same – starting with a hearing test.”