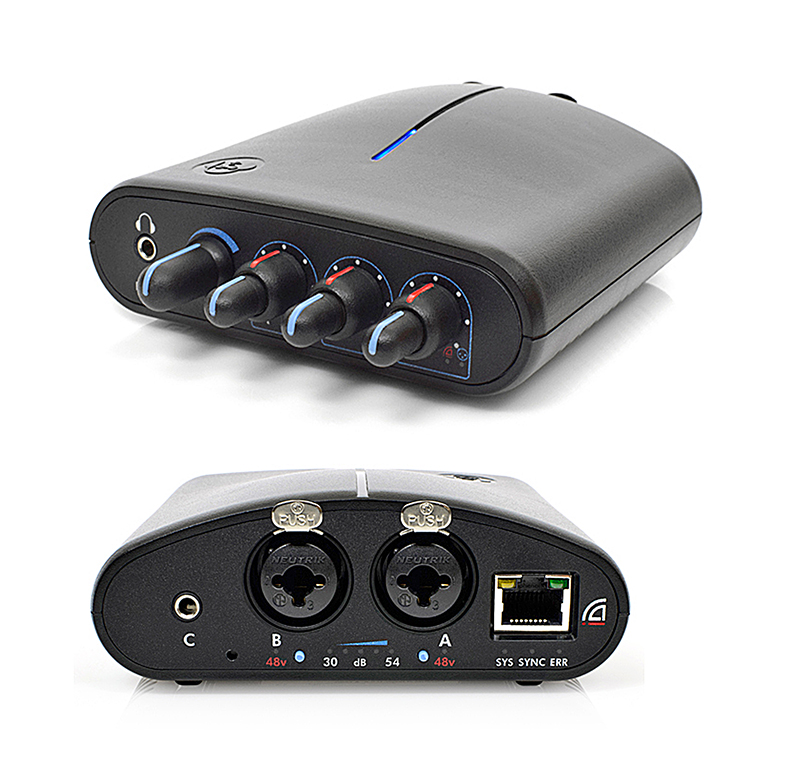 nown for its Hear Back personal monitoring systems, Hear Technologies has expanded its offerings in the Dante digital audio world with its new Switch Back M8RX interface. Created as a personal interface for live sound and recording, the M8RX can also be used for multi-channel headphone monitoring. Street price is $589.

Along with a 4×4 Dante I/O (four Dante inputs and four Dante outputs), the M8RX adds two studio-quality mic/line preamps and an 1/8” TRS stereo input for a total of eight mixable channels. The ultra-low noise preamps feature Neutrik Combo XLR/TRS connectors and switchable 48V phantom power. Microphone gain can be adjusted locally or remotely in selectable increments between 30 and 54 dB and dual-color signal present/peak indicators are provided for each input. When a 1/4” plug is connected, it engages an automatic -18 dB pad. The unbalanced stereo input can be used for aux sources such as iPods or metronomes. The local inputs offer zero-latency analog mixing. Additionally, each local input is routed to a dedicated Dante output. Front panel level controls let users mix the analog local inputs and Dante input signals.

Connections for the two preamps, stereo aux input and Dante Network appear on the rear panel. Status LEDs denote phantom power and gain for analog inputs A and B, along with the normal network SYS, sync and error indicators. If desired, the gain adjustment and phantom power buttons can be locked out.

The M8RX receives power from the Dante network via a PoE+ (Power-over-Ethernet+) switch or through an optional in-line PoE+ power injector. The compact M8RX is constructed of rugged ABS and has a 1/4 x 20 tripod-type thread mount. A mic stand adapter and a belt clip are included. Rubber feet prevent sliding around when used on a tabletop. Each M8RX can be color-coded with large top-panel multi-color LEDs in a multi-unit setup.

Although not available at time of this review, an upcoming Control software release from Hear Technologies can be used to discover and identify M8RX units on a network as well as remotely control microphone gain, phantom power and top-panel LED color selection.

When used with other Dante products (and Audinate’s Dante Controller software), the M8RX allows for some powerful and creative routing options. Multiple units can be used together for a mini-recording studio setup or a simple communication system.

For live sound applications on a Dante-networked rig, the M8RX lends to some interesting scenarios, especially for house of worship, where personal monitoring is prevalent. My approach using the M8RX was to treat each one as a musician I/O “performer pod” with the musician’s local input (mic and instrument) feeding the analog inputs and the Dante returns used for receiving monitor mixes.

Hear Technologies sent two M8RX units and two PoE injectors for this review. Because of the pandemic, I set them up in my studio and connected them to some other in-house Dante equipment.

Using a Dante-equipped mixer, I created a “band mix” and routed it to Dante channel #1 on the M8RX. The keyboard player’s vocal mic and DI output from the keyboard connected to his M8RX’s analog inputs. The keyboardist received the band mix along with dedicated Dante return channels for his vocal mic and keyboard allowing him to easily create his own “more-me” monitor mix.

I did the same for guitar player. Dante Controller made it easy to route signals to the M8RX enabling the guitarist to receive the band mix along with his dedicated vocal and instrument feeds.

Using this “performer pod” approach simplified my setup. I no longer needed to run individual mic cables from each performer to a stage box or deal with monitor return lines. A single Cat-6 network cable transported audio sends, Dante returns and power, while visually cleaning up the cable clutter.

I listened and adjusted levels on the M8RX as a performer would in creating a stage mix. The system was easy to use with clean audio and plenty of output to drive any of my headphones. For most situations, performers want to hear a good band mix and be able to add “more me.” Dante routing made this a breeze to set up for multiple performers.

The units do get a little warm after being on for a while. I’m not certain if I would use the belt clip option, but the mic stand holder worked fine. I also would prefer more robust “EtherCon” type connectors for the network, as I am not a huge fan of RJ-45 connectors, but for a stage setup where the units remain connected, it’s probably not an issue.

In a Dante-based application, the M8RX is an ideal way to offer musicians personal monitor mixing without getting overly complex. The compact units were easy to connect and Audinates Dante Controller software allowed me to quickly integrate them into my existing Dante setup. The “performer pod” approach helps minimize cable clutter for a cleaner stage. For someone running a Dante-based system, the M8RX offers some creative solutions.

With intuitive design, simple operation and robust capabilities, the Switch Back M8RX interface offers mic preamps and multi-channel headphone monitoring in a single interface. When used with other Dante products, the M8RX also allows for some powerful and creative routing options.