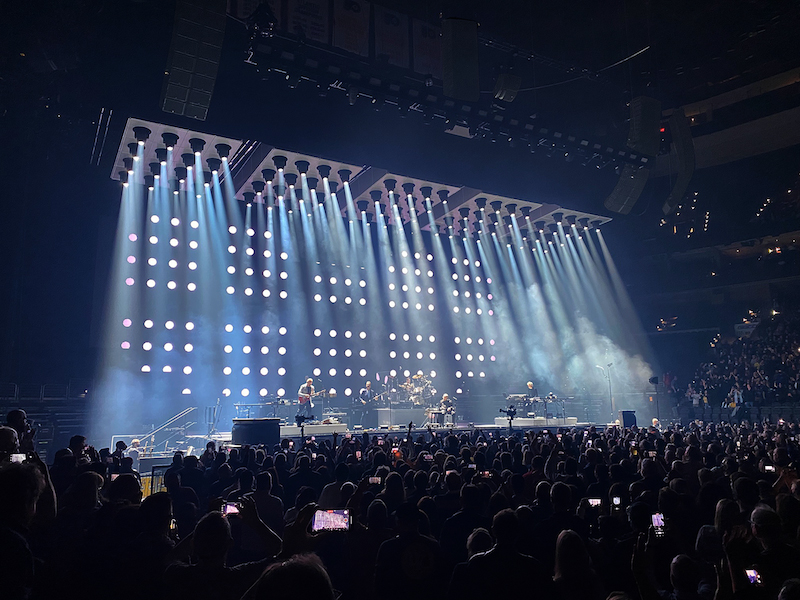 Some bands tour incessantly, but English rockers Genesis — who haven’t been on the road since their 2007 “Turn It On Again Tour” — is not a member of that club.

The onstage lineup on the current “The Last Domino?” tour features keyboardist Tony Banks, singer/percussionist Phil Collins, bassist/guitarist Mike Rutherford, Daryl Stuermer on guitars and bass and Nic Collins (Phil’s son) on drums. Another thing different this time out was that Phil Collins, who has mobility issues arising from complications from a fall he suffered in 2017, performed entirely from a chair.

Over the years, Genesis has toyed with the idea of a reunion tour, but the idea became serious when “The Last Domino?” farewell outing was first announced in March 2020, ironically just as venues were beginning to get Covid shutdown notices. Unsurprisingly, that November 2020 tour launch was delayed to April 2021, which was delayed to September 15, 2021, and later those first shows (in Dublin and Belfast) were also cancelled.

Finally, the European leg of “The Last Domino?” tour got off the ground. Supported by Britannia Row, it opened on Sept. 20, 2021 in Birmingham, England and ran 11 more U.K. arena shows, before being shut down due to a Covid breakout among band members, and the cancelled performances at London’s O2 arena have since been rescheduled as part of an upcoming 2022 European leg, to begin in Berlin on March 7, 2022.

The 21-date North American side of the tour, supported by Miami-based sound supplier Unreal Systems, fared much better, opening at Chicago’s United Center on November 11, 2021 and wrapping up at Boston’s TD Garden on December 16.

Not that it was all a bed of roses. Throughout the tour, production followed strict Covid protocols, yet the band’s longtime FOH engineer Michel Colin, tested positive for the virus. Although vaccinated and showing no obvious symptoms, he was quarantined for 10 days in a Columbus, OH, hotel while the tour continued. Colin has since recovered fully and will helm the FOH position for the tour’s European leg in March.

On other tours, the loss of a key crewmember could have been a disaster. However, says systems engineer Ben Phillips, “Gavin Tempany, the front of house tech, stepped up to the plate and took over. He’s been with us throughout the UK run and, quite luckily, Gavin also mixes FOH for [Mike Rutherford’s band] Mike and The Mechanics, so he’s familiar with the band and they know him and it worked out well.” 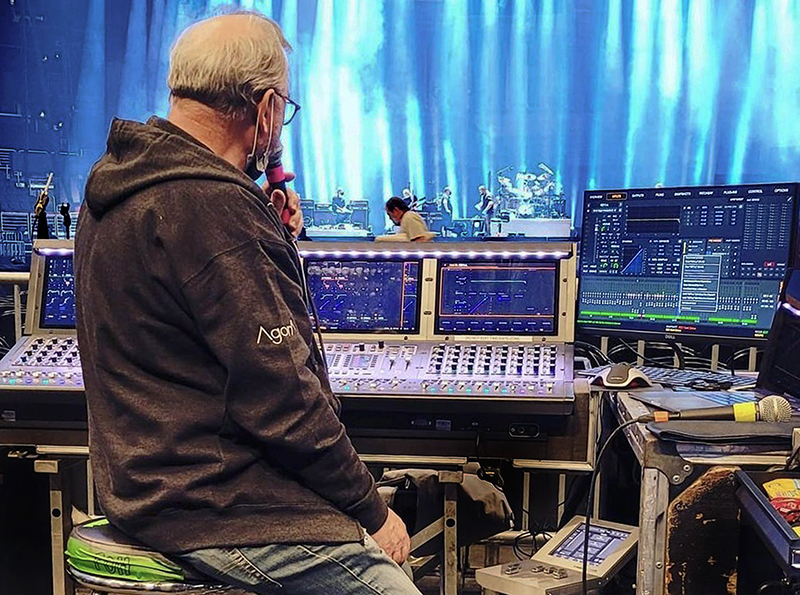 Renowned sound engineer Michel Colin has more than 40 years of experience behind the boards. Born in France, he turned to doing live work after finding that “doing the same song for three weeks in the studio was boring.” His client list includes a variety of French artists, such as Alain Souchon and Jane Birkin, yet he is best known for his long association with Phil Collins.

“I started touring with Phil Collins 20 years ago and I did the first Genesis reunion in 2007,” Colin recalls, “although I live in France and work with a lot of French artists and many types of music, including classical and symphonic stuff. I like all kinds of music as long as it’s well played.”

Colin’s current live console of choice is the Avid S6L, although “my favorite console of all time was the analog Midas XL4 with a Yamaha DM2000 as a sidecar for premix and effects returns. This gave me the sound of analog with the advantage of digital automation. But that was a huge console with five racks of outboard gear, so I tried the first VENUE console that came out. That didn’t sound like the Midas, but the Avid S6L that I’m touring with now is very good, especially at 96k Hz with the new Avid VENUE 7.0 software. I first used the S6L on Phil Collins’ ‘Not Dead Yet’ tour in 2017 and found it to be user-friendly. I use it with a lot of Waves plug-ins and the Sonnox Oxford plug-ins and an external TC Electronic 6000 reverb with its Non-Lin AMS emulation I use on drums. I would never tour with a real AMS — you’d never know if it would work from day to day!” 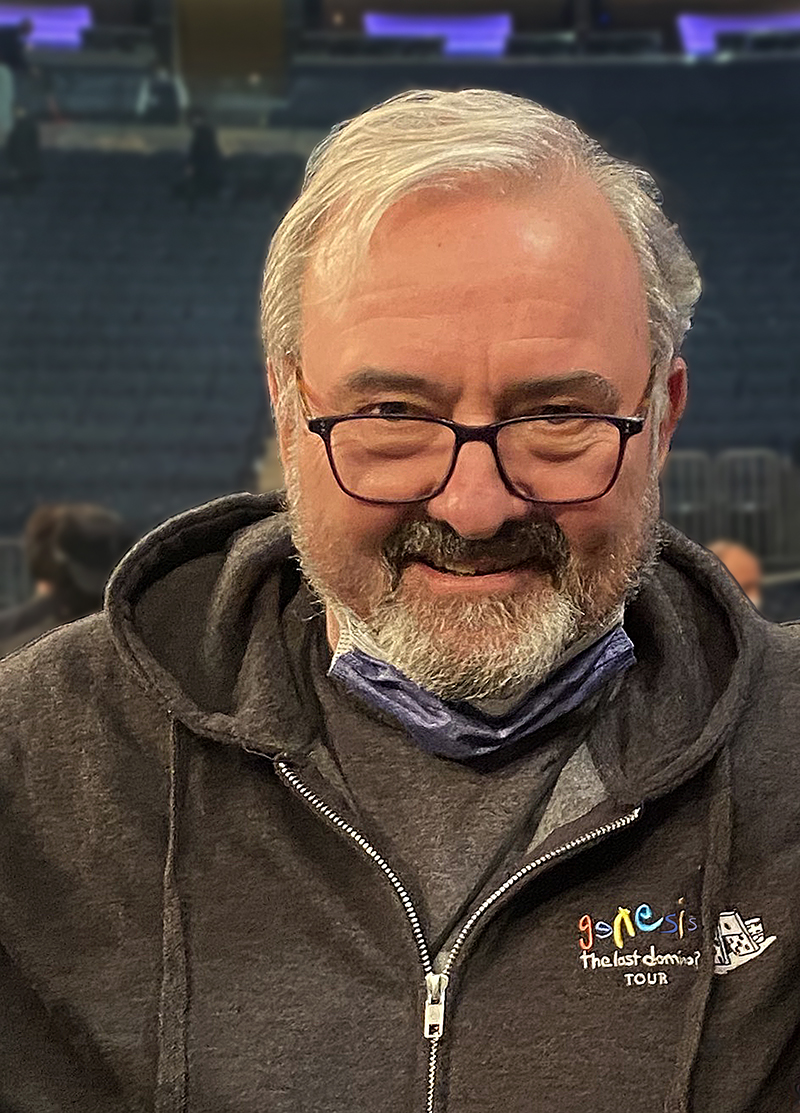 Colin has been using the same Waves plug-in chain on Phil Collin’s voice for years. It begins with the Waves SSL EQ, followed by a C6 multi-band compressor, a de-esser and the CLA compressor. “I also use three Waves delays — the H-Delay doubler, slap and Tapped Delay for repeat effects. From the TC, I use reverb for the lead and background vocals. Sometimes I use all of it. Sometimes, I use none of it. In ‘I Can’t Dance,’ there is nothing on Phil’s voice — it’s straight and dry. On some songs, like ‘Afterglow,’ there are a lot of vocal effects, because I’m trying to make it sound like the record.”

For vocals, Colin found a somewhat surprising combination — a $125 mic capsule on a Shure Axient wireless transmitter. “Phil doesn’t sing with a lot of level, and sometimes he sings very far from the mic and the drumkit behind him — played by his son Nic Collins — is precise and sensitive, but pretty loud, so I need a lot of gain. After trying many mics, I found the sE Electronics V7, which works great and has a nice sound. It was just what I needed, it makes my job easier and Phil loves it in his in-ears.” All the backing vocals use DPA d:facto capsules — also mated to Axient wireless bodies.

“On Daryl’s [Stuermer] guitar amps, I use Audio-Technica AT4040s — it’s a stereo mix with two cabinets for left and right,” Colin explains. “On Mike’s [Rutherford] guitar amp, I’m using an SM57 and an AT4040. He likes to hear only the SM57 in his in-ears. Daryl’s bass is direct, but with a Yamaha Subkick on the cabinet, and I bring a little of that in on some songs.”

The drum miking is mostly conventional, with a Shure Beta 52 on the kick with a Beta 91 inside (with a little delay to make them phase together); Shure SM57s above/below the snare; Neumann KM184 on hi-hat; Sennheiser e 904s on toms and AKG C414s for overheads.

The tour crew is truly international. Systems engineer Ben Phillips, a New Zealand native who lives in Scotland, began in NZ loading trucks, then worked his way up to FOH and monitor mixing, but has focused on system design/engineering the past few years.

“At one time, we looked at doing the tour with an L-Acoustics L-ISA immersive system, but it wasn’t practical due to trim height in some venues, we went back to a traditional stereo system with the L/R mains, the 270° outfills, the center hang with center sub, and four delay hangs in the audience area,” Phillips explains, adding “ the mains and outfills are all L-Acoustics K1s (typically 12 boxes on each); the 270° we changed from K2 to Kara mainly because the K2s were physically too wide to fit into some of the tight spaces in some American arenas, so there would be 18 Karas on the 270s.”

The delays are four hangs of eight K1s. “On paper, the hangs might seem like a lot, but it terms of box count, it’s not much more than a traditional arena setup. Essentially, we’ve just re-distributed the array resources across the venue rather than keeping it all across the stage.”

A pair of L-Acoustics A15s as a center cluster. “These fit the bill well, as it’s a seated audience,” Phillips notes. “However, as soon as the band walks out, they stand and the front fills only cover the first few rows, so then the center hang fills that gap between where the fills finish and the main P.A. takes over.”

The center also has nine KS28 subs acting as a center cardioid sub array, to help propagate the sub energy across the room, and there are 24 KS28s on the ground in a cardioid sub arc array. According to Phillips, “that sounds like a lot of boxes, but they’re not working too hard, so we don’t punish the people sitting in the front. And there’s a smattering of A15s, A10s and X8s to fill holes and bring the perspective down to stage level. The system design is all about even coverage rather than high volume.”