Against the Current Tours with Waves eMotion LV1 Mixer 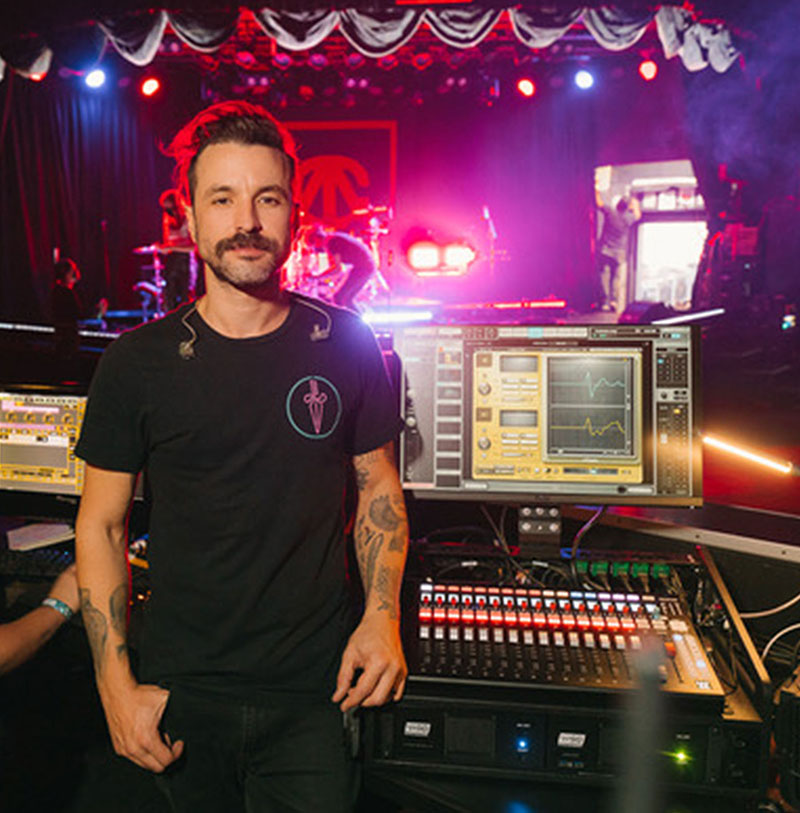 Known for their massive social media audience and energetic live shows, U.S. pop/rock band Against the Current has headlined four world tours, spanning venues from clubs, theaters and arenas to the main stages of major festivals such as Reading, Leeds and Rock am Ring.

Like other touring artists dealing with diverse venues and a myriad of travel constraints, Against the Current and their FOH engineer Lloyd Williams had long faced the dilemma: Compromise on travel logistics and costs – or compromise on sound? “This tour was all flights,” Williams says, “so I was prepared to run FOH as many would – using venue consoles. Against the Current are passionate about quality sound, though; so after discussing the possibilities with the band’s guitarist Dan Gow, we had the idea of investing in a flyable, low-weight FOH system – one that would deliver the quality and consistency the band is used to when touring by bus, where we were always able to transport a large console and space wasn’t an issue. That’s when the Waves eMotion LV1 mixer came up. We knew it was small and portable, and we knew it could run all the Waves plugins that I’ve been using consistently across various consoles over the last 10 years. So we made the jump, with very little time to spare.”

“What we were then happy to find,” he continues, “is that eMotion LV1 also made everything sound natural, warm and clean. No other way to describe it. With the same inputs I’m used to hearing, on mics and DI’s that I know like the back of my hand – I was very impressed by how good everything sounded from the get-go, even before adding plugins. So much of why I rave about this system, I literally learned while I was using the LV1 for the first time in a show. The FOH setup takes three minutes, running a snake takes ten, and the mixer’s connectivity is extremely straightforward, regardless of my I/O choices. Add to that the mixer’s extremely intuitive graphic interface, and the instant integration of plugins – I couldn’t be happier.”

Williams’ current setup includes 32 inputs from stage and four inputs from FOH. His eMotion LV1 64-channel mixer software runs on a Waves Axis One computer, with tactile control provided by a Waves FIT hardware controller. Plugin processing is handled by a Waves Extreme SoundGrid server. Williams’ LV1-compatible stage boxes are a SoundStudio STG-2412 and two DSPRO StageGrid 1000’s, one on stage and one for FOH local inputs. All hardware is racked in custom cases from Circle Three Designs.

“The way I see it, with today’s digital live audio technology, everyone should be able to virtual-soundcheck with total ease,” Williams says. “With LV1, it’s just a single Cat5e to USB-C from the switch to laptop, opening the DAW and hitting play or record. The LV1 master input allows me to switch between live and virtual at a single hit of a button – a game changer for simpler workflow. Most important is that now I have the ability to work on my show file at home between tours. I can easily set up the console on my home office desk, plug it in and get to work from tour recordings – without having to rent a console or needing huge amounts of rehearsal time before the next show.”

Williams’s favorite plugins to use within eMotion LV1 include studio classics like the Waves SSL and API processors: “My first plugin on drums is always the API 2500, which I use adaptively, depending on how much breathing room I feel the PA has on the Master LR and on the snare top. I use high-ratio compression, varying based on the drummer’s playing strength. I also use the Waves F6 Dynamic EQ on everything: It’s the only EQ I use, and I insert it on every single input. The F6’s real-time analyzer is extremely accurate and feels very tight in terms of how responsive it is.”

He continues, “To further shape the drums, I use the Torque drum tuning plugin, especially on snare: the ability to fine-tune a drum’s sound without having to turn a lug has been irreplaceable to me – a huge time-saver. I also have the Waves InPhase plugin on my kick in and out mics, on the snare top and bottom, as well as on bass DI and the bass mic. In the past I used outboard on tours – the Radial Phazer Phase Adjuster – and Waves InPhase unit is just that as a plugin, but with the added benefit of visual wave forms for even finer alignment. It’s witchcraft, much like the Waves Torque plugin.”

Capping off William’s top 5 is the Waves SSL G-Master Buss Compressor: “I insert one on every single group in my mix, and sometimes directly on the vocal chain as well, depending on the vocalist – a seemingly unique choice that I stand by. I absolutely love this compressor!”

He remarks, “The fact I can fine-tune a snare within moments, get the correct phase of kick drum mics, and quickly grab these functions with a tap of the screen – this makes the LV1 a great solution, especially considering how long load-ins are a common plague for all of us. Things happen much faster for me at FOH now, with a show file I can build on and trust. From a tour and production management point of view, this console is hyper-portable and flexible – as effective in an arena as it is in a club.”

“In the end,” Williams summarizes, “both I and the band couldn’t be happier with the sonic quality I’m getting with the LV1. I still have a lot further to go with the possibilities of this system, and I’m truly looking forward to seeing where I can go with it from here.”