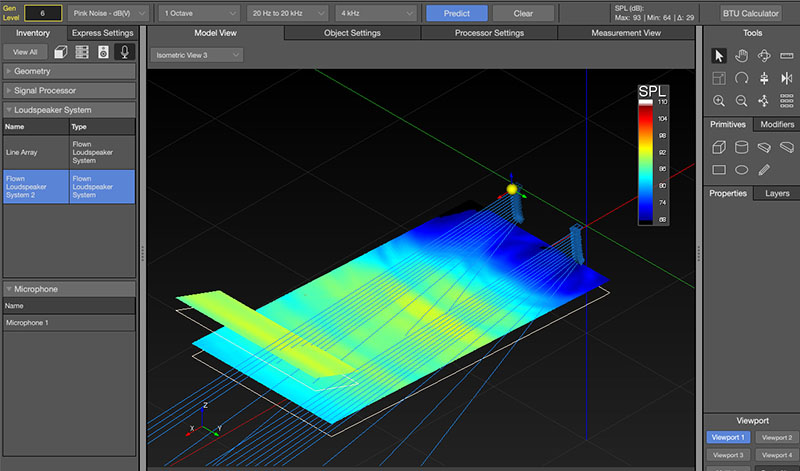 Meyer Sound’s MAPP 3D is a free program that can predict sound energy distribution throughout a room.

Maintaining a punchy mix at lower volumes can be tricky business. Here are some tips to keep mojo in your mix without chasing the patrons out of the venue.

Point the Speakers at the Audience

Did I really just say that? Yes, I did. It’s a simple concept, but it’s amazing how often you see a P.A. system that’s set up just plain wrong. We have great audio gear these days so it makes sense to take advantage of it.

When deploying a P.A. system, pay attention to the dispersion pattern of the speaker cabinets to maximize audience coverage. Sound directed toward the side walls and ceiling is wasted energy, and it creates unwanted reflections causing interference with direct sound reaching the audience. There’s no doubt that deploying an arena-scale line array is best left to an expert, but making an adjustment as simple as toeing in “P.A. on a stick” speakers toward the center of the room can reduce these issues.

Vertical dispersion of a P.A. box is an equally important concern, and sound that’s (mis)directed at the ceiling causes more unwanted reflections. Small-format line arrays that can be ground-stacked are great for clubs and small theaters — providing you can get them high enough to ensure that the audience is within the coverage angle. If you’re using a P.A. on a stick for a small gig, you may need to experiment with the height of the stands. The HF horns should be slightly above the audience (so that the high frequencies aren’t absorbed by their bodies), but low enough to prevent ceiling reflections. Fig. 1 shows a room display from Meyer Sound’s MAPP 3D, a free, yet powerful, multipurpose sound system design tool application for macOS and Windows, that delivers precise, high-res predictions of sound energy distribution in a three-dimensional sound field.

Don’t Beat Up the Audience

One of the problems with using conventional trapezoidal boxes to create a horizontal array is that in order to project sound to the rear of the room, you have to play the boxes really loud. Unfortunately, doing so beats up the folks standing or seated in the front rows and could violate an SPL limit. There may be patrons who want that experience, but you have to consider the fact that some audience members might not want to have their guts shaken by a kick drum.

Line arrays provide a distinct advantage when it comes to addressing this issue, especially when flown. The uppermost boxes of a flown line array are typically directed at the audience members farthest from the P.A. (i.e., the cheap seats), and the inverse square law states that SPL will drop by approximately 6 dB for each doubling of distance from the sound source. Knowing that, the top cabinets can be set to full throttle. No one in the front rows will hear them, and by the time sound reaches the rear of the room it will be significantly attenuated. In a “J” shaped array, the boxes near the bottom of the J are closer to the audience and should be attenuated or “shaded” to avoid blasting the audience to smithereens (not to be confused with the band of the same name).

Another technique which helps keep people in the expensive seats happy is making sure that the high frequencies aren’t taking off their heads. One way to do this is by “frequency shading” the array. This is done by attenuating the high-frequency response of the speakers nearest the audience, set a flat response for the middle of the room, and boost the top-end a few dB in the cabinets directed at the back of the venue.

Delay the P.A. System to the Backline

This is a technique that may or may not make a difference in what you hear at the mix position, but it’s easy enough to do that it’s worth trying. The basic idea is to add a few milliseconds of delay to the mains, so that they “wait” for sound from the backline to catch up. If you’re mixing in arenas, this probably won’t make much difference in what the audience hears. But in situations where the mix is created by blending stage sound with sound from the P.A., it can improve clarity in the bottom end (particularly when the bass player’s stage volume is very loud). A general guide is adding one millisecond of delay for every foot between the backline and the main P.A. Some people use the snare drum as their reference point. I’ve tried this in small venues with mixed results: on some occasions the difference in the bottom-end was quite apparent and in other rooms I couldn’t hear any difference. This leads us to…

Let The Band Do Some of the Work

If you’re dealing with a loud band, don’t fight them, embrace it. Use the P.A. system as a means of enhancing the instruments that need it. Vocals, of course, need the most help because pretty much any instrument will drown them out. Change up your mix method: instead of building from the drums, start with only the vocals in the PA system. Have the band play and push the vocals loud enough to be heard above the band. That gives you a sort of “lowest common denominator” baseline of the minimum volume level you can mix. If that’s unbearably loud, then you have a serious problem and need to ask the band to play at a lower volume (good luck with that!). Explain to them that the lower they play on stage, the more control you’ll have over the mix, and the better it will sound for everyone. That’s why they pay you.

Don’t be afraid to compress instruments aggressively, especially vocal, bass and kick and snare drums. Bass and kick drum give a mix impact but also can set off SPL alarms! Set the attack fairly fast (5 to 10 mS), ratio between 3:1 and 6:1, and adjust the threshold so that you’re always getting 6 to 8 dB of compression. That will help wrangle the bottom-end in your mix as well as keep the SPL police off your back.

For vocals, experiment with the attack time and ratio to avoid pumping, and check for feedback during sound check. Push the vocal channel louder than you expect to hear it during the show, then listen for feedback when the singer stops and the comp’ let’s go of gain reduction. You may need to either reduce the amount of compression or move the mic position upstage to avoid feedback from low-mid wraparound (spill around the back of the P.A. speakers).